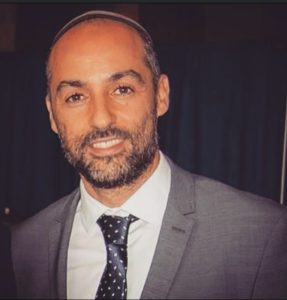 Steve Maman, great-grandson of the Jewish mayor of Amismiz, Morocco, Hanania Ettedgi, was born in Casablanca in 1973. His family immigrated to Canada that same year.His parents, from Meknes and Casablanca, raised him and his siblings in a traditional Moroccan home, instilling in them fundamental Moroccan values regarding family, culture, education and civic duty. Today, Steve and his wife Murielle, who is of Marrakechian descent, are the proud parents of six children between the ages of 2 and 23. They too followed in their parents’ footsteps and built a home where Moroccan culture and values are celebrated. Steve developed an expertise in vintage car collection management, acquisition and brokerage. He founded ‘The Prancing Horse’ dealership and is the curator of the Demers collection, which he built, comprised of 675 of the world’s most coveted collector automobiles. Although Steve has not lived in Morocco, it remains a country sacred and beloved to him, a country he calls “The Holy Land”. The highly guarded Moroccan values of moderation, tolerance, and protection of minority rights are what gave Steve the needed foundation to do what was deemed impossible. In July 2015, inspired by the Right Honourable Stephen Harper, former Prime Minister of Canada, Steve launched a humanitarian mission that touched the lives of thousands, in a very concrete way through the mission’s ground work and through its international media coverage. When DAESH took over Mosul city in Iraq, in 2014, thousands of women and children were sold as sex slaves to soldiers and civilians in the newly founded caliphate. While the world sat in silence, Steve took a stand for a minority whose rights were not only disregarded, but torn to shreds. Living by the words “Act now or remain a spectator,” Steve founded CYCI: The Liberation of Christian and Yazidi Children of Iraq. In less than a year, CYCI rescued 140 women and children from their captors; provided financially for 2310 refugees’ safe passage from Greece to Germany; partnered with the Greek Government to open the Petras Camp which looks after 1000 Yazidis; assisted over 25,000 Yazidi, Christian, and Muslim families in Kurdish camps for refugees and displaced persons by distributing food, heaters, winter clothing, etc. as well as providing medical assistance. Throughout this mission, Steve made Morocco an integral part of CYCI’s success, the country that taught him about acceptance and openness to all religions. Morocco contributed to CYCI through its principles, and these principles are what made Steve Maman the man he is today earning him recognition as “The Jewish Schindler”. ◦