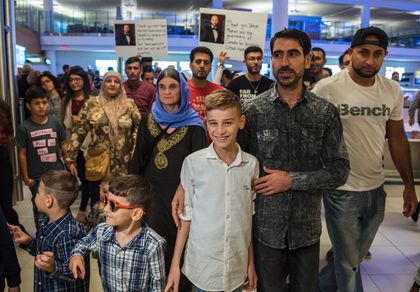 The 12-year-old Yazidi refugee was reunited with his mother at Winnipeg International Airport earlier this week.

Emad is safe in Canada now, and the tearful reunion reminds us of the good Canada does in the world.

In the summer of 2014, Emad and his family were separated and captured by Islamic State militants, who were targeting Yazidis in northern Iraq.

ISIS goons were threatening to wipe out the entire Yazidi population, many of whom were stranded in the Mount Sinjar region.

At that time, Western leaders preferred to ignore the threat posed by Islamic State.

As then U.S. president Barack Obama foolishly quipped about ISIS in January, 2014: “The analogy we use around here sometimes, and I think is accurate, is if a J.V. (junior varsity) team puts on Lakers uniforms, that doesn’t make them Kobe Bryant.”

In May, 2014, Obama defended his decision not to intervene militarily to stop ISIS in their grisly crusade.

In the following weeks and months, ISIS unleashed a genocidal campaign against the Yazidi people.

The UN estimates 5,000 Yazidis were killed that summer, another 7,000 were abducted into slavery and the remaining 50,000 were forced to flee their ancient home in the Ninevah province of Iraq.

A report by the UN High Commissioner for Human Rights details the “brutal and targeted” killings of Yazidis at the hands of ISIS.

This included the enslavement and rape of girls as young as six and the kidnapping of boys as young as eight, who were then forced to become frontline fighters for Islamic State.

Somehow, through it all, young Emad was able to survive.

A photo of a frail and terrified boy went viral on social media.

Covered in dirt and blood, he was being driven to safety by an Iraqi guard.

The boy’s uncle saw the photo and shared the news with his mother that her son was alive.

Emad’s mother and younger siblings were able to escape from ISIS captivity two years ago, and arrived in Canada earlier this year, as refugees.

They held little hope, however, that Emad was still alive.

“Because of ISIS being so evil, and torturing boys and killing everyone that doesn’t do as they say, we didn’t think we would ever see (him) again,” said his mother.

But thanks to the work of activists in Canada, particularly Steven Maman and his organization, The Liberation of Christian and Yazidi Children of Iraq, the family was reunited this week.

But in 2017, some Canadians are doing their best to reunite Yazidi families, who were torn apart by the horrors of a civil war and jihadist insurgency.

Canada remains a beacon of freedom and opportunity for people all over the world.

At a time where political tensions and polarization are escalating in Europe and the United States, Canada remains a sanctuary.

We are welcoming to newcomers and ready to lend a helping hand to those in need of our protection.

Canada’s proud record of helping the world’s most persecuted people, and offering them a second chance at a happy life, is something worth celebrating.